I love music. I love music with every fiber of my being. And I think almost all of us do, we all have this unique and personal relationship with music. Our music preferences, our music histories, the music we grew up with or were surrounded by and influenced by, are all different.

Some of us are enthusiastic listeners, others are lucky enough to be avid concert-goers, and some are even creators themselves. Either way, all our music stories are so, so important as a whole, not just to the industry itself but to who we are as people, as individuals that could never be replaced. This is my music story:

I started playing the recorder along with quite a few of my other classmates in about grade 4 or 5 (I feel like this is a standard primary school practice, at some point in school you’re made to play the recorder lol), and joined the school choir at about the same time. I adored choir, auditioning and being accepted then getting to sing for the school was my pride and joy, and it was just such a beautiful thing to hear so many voices come together to create such beautiful sounds, the sonic possibilities were endless. We had the most beautiful, impassioned, enthusiastic choir/music teacher. She reminded me of Julie Andrews for some reason (I can’t believe I don’t remember her name).

We learned how to play the recorder in groups, and even got a few lessons on the xylophone to help learn scales.

I started playing the guitar when I was 11. It just looked like the coolest instrument ever, like, the definition of cool. And to offer context, this was a time where guitar-strumming, pop-rock ballad-belting stars like Demi Lovato, the Jonas Brothers and then country star Taylor Swift were at the height of their popularity. To say that I idolised them would be an understatement, I legit wanted to BE the next Demi Lovato. I wanted to be a music-maker too. I can’t even imagine how the conversation with my parents about starting lessons and buying an actual guitar, went down, but wow, I am blessed to have parents who encouraged all my interests.

I still maintain that that guitar, which I still have till this day, 10 years later, is the best gift I have ever received in my entire life and nothing could ever top it.

After one guitar lesson, after our teacher warned that it was a hard instrument to learn, our class almost halved in size. I was determined to stay. My trustee music file, a cover I’d chopped off the front of a magazine (DSTV Dish) of Demi and Joe from Camp Rock mid-song stuck in the front, was all the motivation I could ever need.

I had a cult-like obsession with all things Disney, music-wise. I mean we had all the CD’s; The Very Best of Disney Channel (Over It, My Hero Is You, The Party’s Just Begun, Get Your Shine On-those were some SOLID tracks!!), Corbin Bleu’s album (WHO REMEMBERS DEAL WITH IT?!), The Hannah Montana/Meet Miley Cyrus Double disc, the High School Musical 2 soundtrack and although not Disney produced, but definitely Disney endorsed, The Jonas Brothers second and third studio albums (SOS, Burnin Up, Inseparable, SO GOOD).

But that’s not all I listened to, don’t worry.

Other artists/albums that stood out to me or  on constant repeat in my life were Alicia Keys’ ‘As I Am’ album, Chris Brown’s second album ‘Exclusive’, Michael Jackson, hymn collections, the Mama Mia movie soundtrack, Madonna’s ‘Confessions on The Dance Floor’ (the whole thing is one endless loop with barely, if any, pauses like one endless metamorphosing song, which still blows my mind), James Blunt’s ‘Back To Bedlam’, the Sarafina movie soundtrack, Chris De Burgh, rumba lingala music (dad loves Franco), Zahara etc etc.

The art of listening to music in itself is such soul food. When I’m having a bad day, or just need to feel something, I can count on music to give me that.

Now back to the guitar!

Our little class performed as a group during a school concert.

Once we moved to Kenya, I managed to join the school choir there as well, meaning I sang in the school choir from Grade 4 up till the end of high school, British system year 13 (6th form) making that about 9 years of singing. My friends Letty, Leigh-Ann and I also started singing as a little group at school events. We’d split the verses into solos between us and sing the chorus together in three voices. It was the closest thing we got to singing solo. I remember our math teacher coming up to us after we’d sung the song ‘Miracles’ in assembly and saying that she was “so touched”. That was the first time it sunk in what singing could do for people on a personal level.

Singing didn’t stop with choir, neither did it start there. When friends would come over, we’d recreate music video or movie scenes (*cough, BarbiePrincessandThePauperandHighSchoolMusical, *cough)* and we’d spend hours playing Sing Star (uhm, BEST. GAME. EVER.) at my friend’s house.

Plus since before my sister and I were old enough to fully comprehend songs and music my parents made sure we sang church hymns as a family at home together. I’m sure before we could even read we’d stare at the hymn books and pretend we could sing along.

It wasn’t as simple with guitar to move, pick up and continue the way it was with singing. I took lessons at the Kenya Conservatoire of Music for a year before stopping. It was too far to always be driving back and forth to, and lessons are expensive. I never did take guitar lessons after that. But I never stopped playing either.

My sister, two of our family friends, Stephanie and Alexandra, and I sang prepared songs in church a lot, my sister and I even sang at one of our pastor’s wedding and sometimes we’d sing for guests when my Mom had visitors over. As much as I’d hated it when my Mother asked me to play for people, I can’t tell you how special it is to have an audience, any audience, and a parent who actually cares about or appreciates what you do.

My friend Leigh-Ann and I started posting covers on YouTube, and our classmates and our friends and Moms were so unbelievably supportive of it, of us. We performed at a concert Stand Up Shout Out hosted and my Dad was right there in front, filming the whole thing.

About a month later I got to sing and play with a musician I was low-key (what lies, high-key) obsessed with (Carter Harrell) at a music workshop he and Stand Up Shout Out did. I fumbled over everything like a person who’s never opened up their mouth to speak, let alone sing, and played the guitar like I had picked it up for the first time that day but HEY, memories!

Last year, my sister and I performed ‘Nobody’s Perfect’ by Jessie J at a Talent Show our church hosted and won best duet. It was the first time being on-stage for me in 2 years. 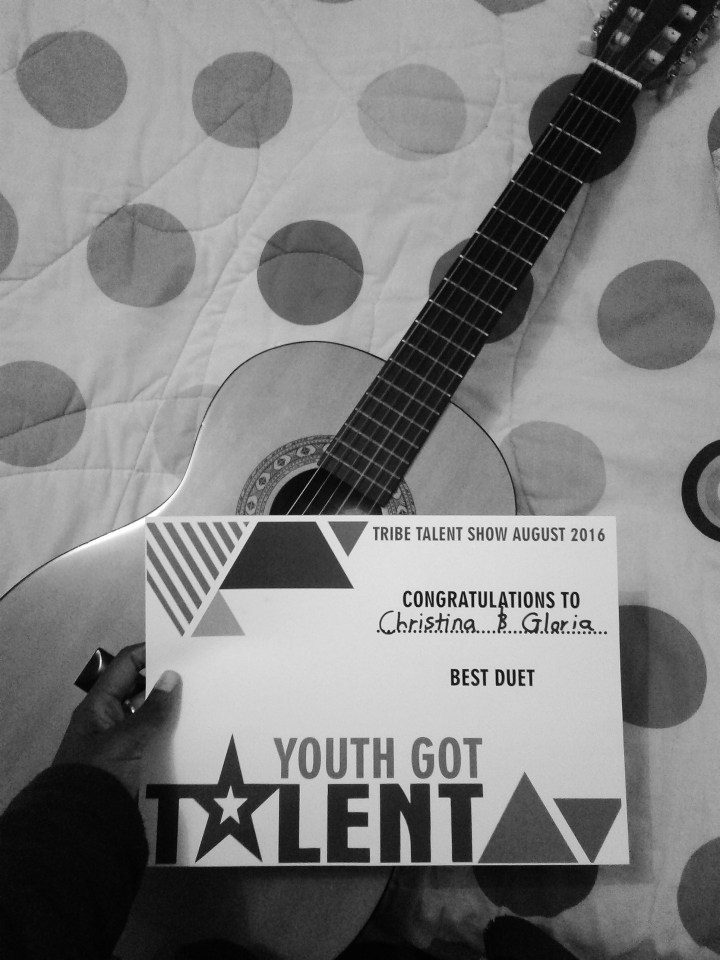 There had also been a brief stint my sister and I had learning how to play the piano a couple years ago. The piano is such an amazing instrument, the baseline of all music if you ask me, and I’m sad we never continued.

Where am I now?

I’ve started teaching myself new chords. I still upload to YouTube once in awhile, but definitely not as often as I did before. It’s not as fun without a partner, and interest in what I upload has dwindled, and as much as I like to argue that views don’t matter, the decrease in views cripples my self confidence, and waiting to see who will like them or how many people will watch is anxiety inducing. 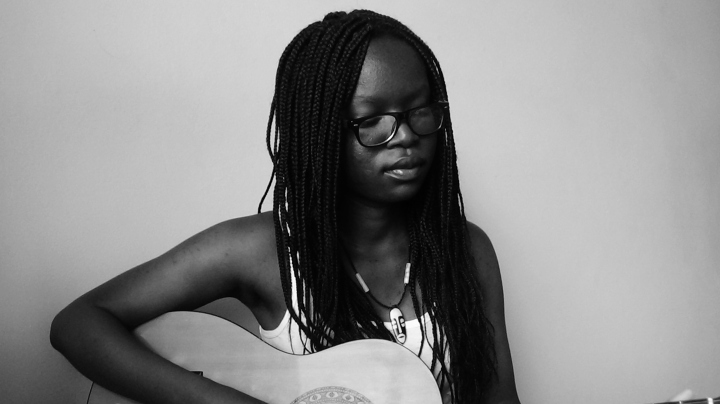 It’s such a personal thing to put yourself out there in that way. And I think I need to work on my confidence first before I ever hope to make it a regular thing. I’m a bit of a perfectionist when it comes to sound and music and if something isn’t perfect I don’t want to do it, which, is wildly unhelpful and detrimental to my overall progress as a ‘musician’. I need to find myself and my sound and my voice.

Though, I really am itching for a chance to perform again. Nothing in the whole entire universe compares to that feeling you get from being onstage, holding the attention of an audience and receiving that kind of feedback in real time.

In all honesty I’m not as great of a guitarist as someone who’s been playing for 10 years should be, to the point where I’m almost too embarrassed to admit it, but I love it and it brings me so much joy and inner peace and that’s all that matters. I don’t know who I’d be without my guitar and knowing how to play an instrument. It’s an act that offers a release nothing else can. It helps me speak up in a world where I feel like my voice is never heard.

I need to be confident in my own music tastes and not feel pressured to like listening to what everyone else likes listening to and to not want to shrink away or be ashamed in admitting what it is that I do like. I’d rather be judged for my fierce unwavering passion for something than to create a relatability based on lies.

It is still very much a big dream of mine to be a musician, or to go on a tour, or record a proper song in a studio, or play at a concert in front of hundreds of people, or to play in an actual  restaurant or coffee shop (aaaaah, I would die of happiness)!

How about my music taste nowadays? I can’t really describe it. Pretty basic and mainstream honestly  ¯\_(ツ)_/¯

I’ll leave a list below for you to be the judge:

Who Are You by Aquillo

You’re Somebody Else by Flora Cash

Sick of Losing Soulmates by dodie

Learn To Let Go by Kesha

No Limit by G-Eazy

Wolves by Selena Gomez and Marshmallow

Why Do You Feel So Down by Declan McKenna

I Went Too Far by Aurora

Havana by Camila Cabello (you love it too, don’t lie)

I think it’d actually be pretty cool to ask my parents what they listened to when they were my age.

That’s my music story! What’s yours? 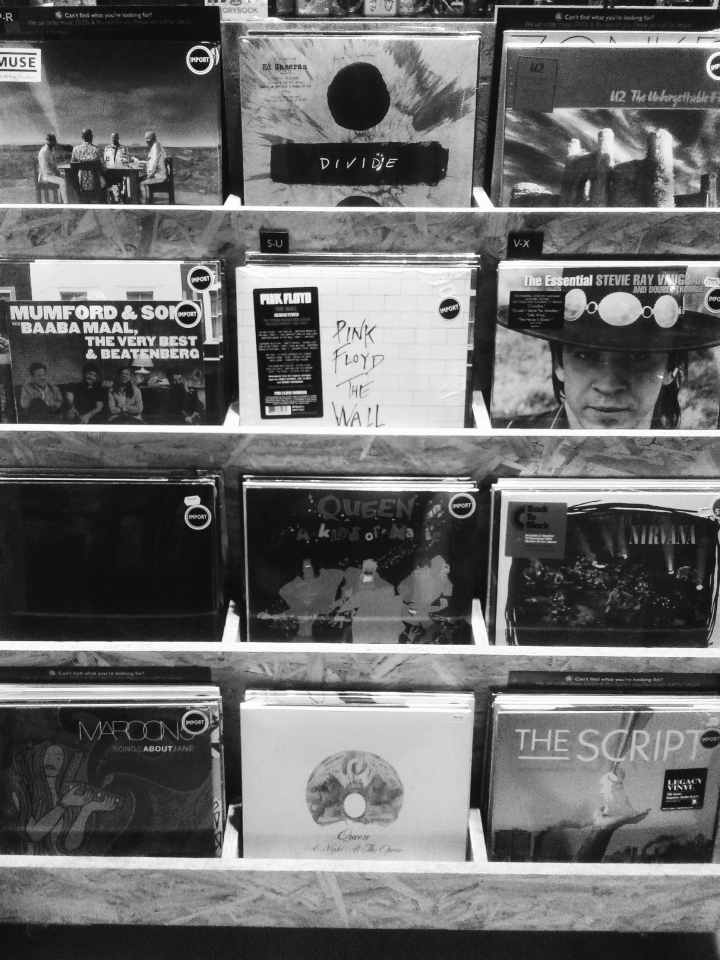