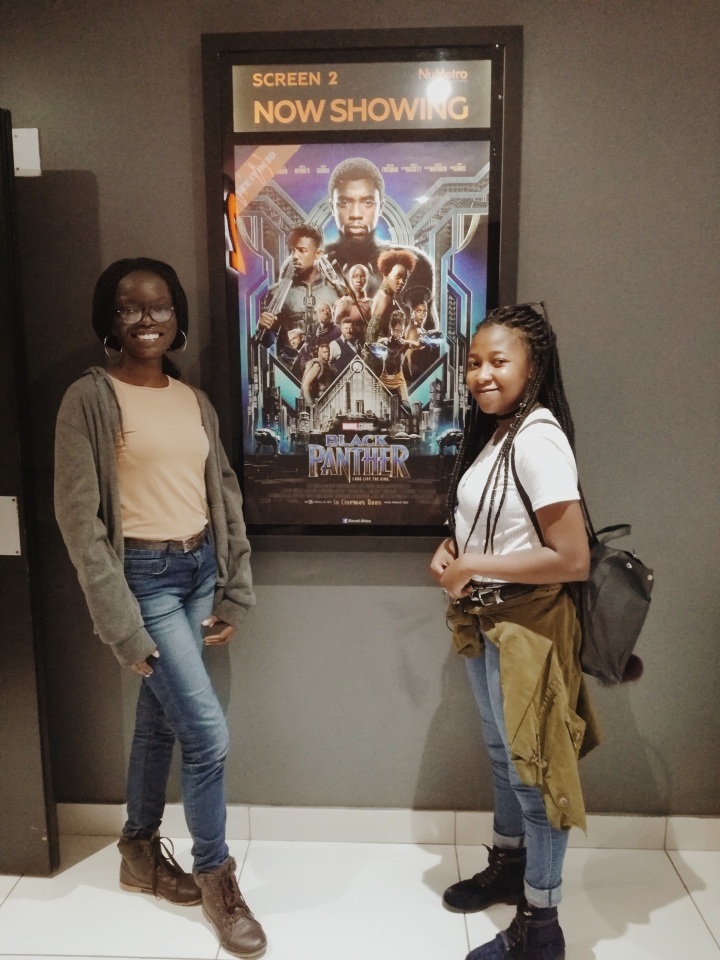 First things first, major movie spoilers ahead! So don’t read if you still want to actually enjoy the film 😅 If all the trailers and Tumblr/Insta/Twitter posts haven’t ruined it for you already. 🙈

I watched Black Panther on Wednesday night! Together with my sister Gloria and our friend, Gift.

To be honest I was a little surprised when I first learned that the Black Panther would be getting his own film. If I’d followed the comics I’d have known about his character before watching watching Captain America: Civil War, and that Marvel has been planning to make a film adaptation of Black Panther for quite some time now.

I feel like we didn’t get to learn too much about T’Challa in Civil War. He was just the guy on a personal mission to avenge his father’s death. At least, that’s pretty much all I remember.

I wasn’t too sure if I was particularly interested in a Black Panther movie (I mean, I have missed many a Marvel movie – Ant Man, Guardians of the Galaxy, Dr Strange), what would make me go see this one?

When info on who the cast members were gonna be was released, as soon as I heard Lupita Nyong’o (my fellow Kenyaaann) was gonna be in it, I was sold.

And then, that epic trailerrrrr dropped! I must admit I’m beginning to hate trailers because of just how much of the movie they reveal but the temptation to watch them always wins 😂

Even before the trailer came out, enthusiasm surrounding the movie, especially by the black community, worldwide, was at an all time high.

I don’t think I’ve ever seen so much hype for a movie in my entire life.

It’s all been so exciting!

It’s not often that you get to see a major movie with a predominantly black cast in cinemas to start with, and then to do so phenomenally well at the box office.

Even beyond the movie itself, seeing the impact it has had has been so surreal. To see people worldwide and even here in little P.E. dressing up in their traditional clothes to go support this movie, selling out movie tickets weeks in a row, and showing up in such huge numbers – it has been an experience unlike any other, that I hope to see again and again in the years to come.

I can’t put into words how much it means to see people who look like me on screen, compared to the endless amount of predominantly white media we are constantly, relentlessly bombarded with our whole lives and I’m sure other Africans can agree.

Who’d have thought we’d live to see the day when a Marvel movie full of predominantly black superheroes would be on the big screen?!?!

I love movies, and I love cinema culture. It’s scary to see how many movie theatres are closing down. I hope if anything that this all proves that people are still willing to pay to see a good movie in cinemas! Movie culture is not dead.

Now to the movie itself. It wasn’t what I expected it to be about, but then again movies rarely are what I picture them to be, lol. Going into it I knew that Michael B. Jordan was a villain, I just didn’t know how. I assumed the movie would be about fighting external threats to the kingdom of Wakanda, and maybe M.B.J’s character already being a part of that world but betraying the kingdom to spies or something. I mean, the movie was a little bit like that to an extent, but it was mostly centered around a story about family.

I wish Klaue stayed alive longeeeeer, he was my actual fave!! I really liked Agent Ross too! I wasn’t expecting him to be an ally. I wish there’d been a little more conflict there, but y’know, movies can only be so long! I was also super happy to see Sterling K. Brown, aaaahh (I’m obsessed with This Is Us and his character, Randall)!!! I had no idea he’d be in the movie so it was suchh a pleasant surprise. And how AMAZING would it have been if (the husband 😂) John Boyega was in Black Panther! For real.

The movie had the such STUNNING visuaaalsss, and the costumes were out of this world, such attention to detail. What a culture-rich movie!!!! Never thought I’d see so many different African cultures represented on screen – the clothing, language, HAAAIRR, everything.

The Queen Ramonda was gorgeous, Angela Bassett is a true VISION, T’Challa was so loveable (you can’t help but always root for him), I’m glad we got to see just how multidimensional of a character he is, Shuri was the GRREAAATESSSTTTTT (I loved how modern of a princess she was, with her crazy tech skills, and seeing her in both her cultural and modern attire, and no one was more EPICCC than Okoye (the woman makes me want to, like my friend Gift said, actually go out and shave my head. And go out and buy a wig just so I can throw it in someone’s face. Plus y’know, join an elite female army and kick ass), M’Baku was hilaaaarious omg, and even though I wanted Erik Killmonger dead from the beginning, I totally get his point of view and what he was fighting for. But at the same time agreed with the leaders of Wakanda. Soooo many important themes and issues were raised through this movie.

I mean, yes, Colonisers have stolen so much from Africa/ns and are, to an extent, still oppressors, and Wakanda could potentially liberate black people worldwide, but at what cost if through violence? But would it not be worse to turn a blind eye to everyone else’s suffering? And should every country really feel obligated to take in refugees? Plus what defines identity? I personally didn’t see how Erik could call himself one of them and be accepted into Wakanda when despite being their blood relative, had been gone for so long but was a virtual stranger. What does that say, in a greater context, about how we Africans relate to our Western counterparts, i.e. African Americans?

I wisshh Wakanda existed. That the continent of Africa had this big beautiful hidden secret. Mannnn.

That last line Erik Killmonger gave before he died KILLLLLLEDDD ME, it got me rightttt in the feels!!!! Like an actual punch in the gut, honestly. Everyone in that theatre felt it:

“Bury me in the ocean with my ancestors who jumped from the ships, because they knew death was better than bondage.”

Which gets me thinking about a whooole bunch of other things. Like, sidenote; it’s honestly so unfortunate that not much black history is taught to us in school.

I left this movie feeling a lot prouder to be black, to be African, honestly. Who’d have thought an American film (although American film about Africa, still American all the same) would do that? Plus, they really tried with those accents 😂😂😂 And the music, EYYYY where are all my Destruction Boys fans at??? 😂😂😂

And omg I was so happy to see BUCKYYYY IN THE POST-CREDITS SCENE!! 😭😭😭😭

Don’t kill me, I still think I still like Thor Ragnarok a little more than this Marvel film, but it’s the impact and the meaning that makes Black Panther so much more important. ♥

Representation mattersssssss, it matters so much. And I’m so glad that a whole generation of kids are growing up with popular black superheroes to look up to. I’d have killed to see this kind of representation, which was virtually non existent at the time, when I was younger.

So here’s to more movies like this. Movies centered around family dynamics, movies portraying STRONG WOMEN, black people in positions of power, women in positions of power, in all types of hairstyles, movies that show  young girls, like Shuri, excelling in science, because it shouldn’t have to be a male dominated sector, movies that don’t revolve around the romantic pairings, movies that show healthy relationships (guys what is Nakia and T’Challa’s ship naaame?) and more movies showing men expressing their emotions (boys can cry too y’know).

Have you seen Black Panther yet? How did you like it? Remember, 8 out of 10 star ratings only 😂😂😂

Escaped reality for a little while. 🦋🌈🌊
Putting my worries to rest and rising with the sun.
Dec/Jan memories. 🇰🇪
Home of the perfect wave 🌊🌈✨
Caked in sand from head to toe but still grateful for beach days 💘🌊💘🌊
Actually remembered to bring a towel this time. 🏖️
A collection of window seat pictures. 🦋⛅
Mornings like these 🌊🌺☀️🍃🦋🌸🌼🦈
Loading Comments...
%d bloggers like this: